Foody francophiles and beer geeks usually don't mix - and unfortunately I'm both.This results in slightly schizophrenic holidays, since Germany and England may provide excellent beers, subtle cuisine and decent weather are hard to find. And when you try to recover on a meteorological and culinary escape to Provence it's best to forego the barley for a short while and make do with some excellent rosé wines. 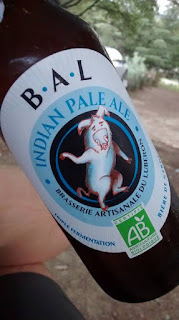 The traditional French beer landscape can be divided into three regions that don't really consider themselves French. The first of these is Normandy/Brittany, where a handful of Anglosaxons create some decent real ales. A little further to the North, on the Belgian border, we find the bières de garde  and saison beers. Finally there is the Alsace region, also known as 'France's little Germany', where you find some small breweries between the vineyards, not to mention the giant breweries producing Kro' and 33 Export for the less discerning customer.

This summer the weather convinced us to drive directly south, to the Lubéron to be exact. A wonderful region with great wine, nice weather and mouth-watering food. And, lo and behold, with an actual little 'micro brasserie', and organic at that. The somewhat off-putting name "BAL" was easily explained and forgiven since it was the acronym for Brasserie Artisanale du Lubéron.

On a tiny marché artisanale in between the goat's cheeses and rosé farmers we had a bottle of brune and the inevitable blonde, the latter a bland tasting product. The brune however actually tasted of roasted malts - one might even be reminded of a stout or porter. A bit too sweet for my taste, but still, did I mention the actual roasted barley? A couple of days later we even found. from the same brewery, an IPA! A real one. With houblon. Not a lot, and nothing too bitter, but still, without a doubt, hops.

Unfortunately that about wraps it up for the beer highlights of this summer. The brune and IPA were nice, but the actual year-round range (a slightly sweet blonde featuring clove, a nondescript ambree and a boring blanche) left a lot to be desired. And even though we didn't really look for it this year, and even though I'm sure there are some wonderful little breweries to be found, when encountering a small, artisanal brewery in France you can expect the following;
Having tried a geuze (overly sweet with a hint of sour), a faro (mostly sweet) and some more failures from the Hyper market I was done for the summer and stuck to pastis and rosé, happy to be one of those beer geeks that fortunately also enjoys wine...

This post originally appeared in Dutch on Mout&Peper
Posted by Wouter at 12:54 PM