It seems most countries have their very own national fried egg dish - Spanish tortilla, Italian fritata, English scrambled eggs, Mexican huevos rancheros, even the Japanese put a somewhat sweet egg-roll on suhsi. The Dutch have their own: the boerenomelet - a 'farmers omelet' . It basically is a standard omelet folded over a bacon, onion and mixed vegetable stir-fry avant-la-lettre. It's hard to really mess up, but a few hints can make it pretty impressive. 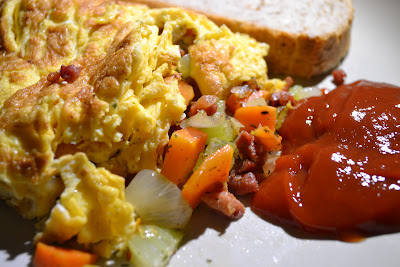 First of all, good products. Fresh, organic eggs, bacon and veggies. Cheese if you want, but then go for the real deal: Farmhouse Gouda. You will need some slices of excellent bread as well. Then there's the filling. Don't over-fry the bacon, it should still be a little soft. The onions and other vegetables will re-soften them a little too. The filling should contain at least bacon (or maybe ham), onion and carrots. You can then add peas, mushrooms, leek, even cooked potato or butter beans.Make sure you have the filling cooked and keep it warm before you make the omelet itself. For a six egg omelet you need about 150g of bacon, 1 diced onion, 1 diced carrot and about 150-200 grams of the other (diced) vegetables.

Finally, the omelet itself. This too isn't that complicated, but do it wrong and it won't be half as nice. Heat up a frying pan, for a six egg (2 person) omelet a 24cm version will do. Add a splash of vegetable oil and then a little butter. When the fat is hot (but not burning), add a little salt to the whisked eggs and pour the mixture into the pan. Now comes the important part: using a wooden spatula, gently stir the mixture towards the center of the pan, scraping along the bottom. Make sure the liquid mixture fills up all open spots. Keep gently stirring until at least half of the egg has solidified in rough patches. Then shake the pan to evenly distribute the remaining liquid egg, lower the heat and allow the egg to almost cook trough. All this will ensure a fluffy and interesting texture.

Chef Jaques Pepin demonstrates how to make both the "Country omelet" we use here and a classic French version in this video:
When only the top part is still a bit liquid and shiny, pour the bacon/vegetable mix on one half and carefully fold over the other half of the omelet. Congratulations, you're done!

Serve with ketchup (yes, yes, we use ketchup too) and a nice slice of bread.

This dish can be paired with almost any beer, as long as it isn't sour or to sweet. I personally had it with a Stades Leicht Light beer, which i find pretty good.

This article oringally appeared in Dutch on Mout&Peper
Posted by Wouter at 10:00 AM